I stare around the completely dark room. My heart is pounding at a million miles, my head throbbing and I’m trying to re-trace what happened? I can hear babies crying, mothers babbling and as my eyes begin to focus I can see a curtain and dull lights above it. I hear a lady coughing loudly, she sounds like she’s being sick. A wave of nausea comes over me. It stops for a moment then a loud rough voice can be heard…it’s the same woman, she’s on the phone to someone, sounds like her partner, she’s complaining about having a 5th child…where the hell am I.

As my head scrambles to piece together the puzzle I slowly realise I’m back in the hospital room where they tried to admit me earlier. I look over to the chairs in the corner where I seem to recall Chris and my Dad sitting but they are empty. My hand slides over my belly, it feels firm but deflated, slightly empty and there is no one in there moving! I can hear loads of babies crying but as I look around my area there are no babies in sight.

I don’t really recall where my babies went. Vague memories of the night flash in and out of my mind. The operating table, seeing a bub…or two, was it all real or was it a dream? I can’t work it out. I suddenly feel overwhelmingly lonely. I look for my phone but I can’t find it. Tears start streaming down my face…I have no idea where anyone is!

I was back on the ward of 4, with 3 other women and their babies. As I lay there with tears streaming down my face the anxiety of the unknown well being of my babies grew and grew until I almost wanted to scream. I grabbed the buzzer and called the nurse.

Finally the nurse arrived, a lovely young girl who asked me what I needed.

“Where are my babies?” I asked

“I believe they are in the NICU?” she replied

“It’s in another area you can go there tomorrow.” She kindly replied

“I’m sure they are fine, they would call us if there was a problem she replied. Now how about I get you a tea you haven’t had anything to drink for a long time.” And with that, she was gone.

It was just on 2.30am as the nurse returned with a cup of tea. I sat up and flicked the TV on. I didn’t care if I disturbed anyone. They had their babies…I didn’t!

The next few hours dragged and dragged, they really were the longest in my life. I had no idea if these babies were ok. I kept re-living moments from the night before my mind was racing at a million miles! Had I really touched them? What did they look like? Were they still breathing? Were they eating? I should be there.

At around 4am I buzzed the nurse again. I asked her if I could see them or something the waiting was doing my head in. She told me I could go after the Doctors had done their rounds in the morning. What?! That’s like hours away! That is a lifetime when you haven’t seen your newborn babies! I sat in the dark tears streaming down my face, counting the minutes until 6am.

I was doing everything I could not to have a full blown panic attack and the cooking channel wasn’t quite keeping my anxiety at bay. I could here some activity in the hallway, they appeared to be getting ready for breakfast…finally!

Another lady in my room buzzed the nurse, as she came in I thought “That’s it I’ll grab her on the way out and demand answers!” Just at that moment a some what familiar face popped up in front of me. It took me a couple of seconds to process who it was but there in front of me stood Chris’ brothers girlfriend. She is a nurse at the John Hunter Hospital, had just finished a long night shift and came straight to see me. Just seeing someone I knew was enough for me to break down in tears! One look at me, and she worked out I was far from ok. A few moments later and she was off to check on the boys.

When she got back I had propped myself up and was eagerly awaiting news from someone I knew. She was able to report that the boys were in NICU and were ok. A wave of relief flowed over me although I can’t even start to explain how much I needed to see them.

The next few hours dragged again as I waited for the docs to come back. They had to take my catheter out first, then they wanted me to eat something, try and have a shower and go to the toilet before I could do anything. The pain was starting to become very apparent.

I never really stopped to think about what it would be like to have a c-section and certainly I didn’t realise just how traumatic it could be. The pain and discomfort as I tried to move was excruciating! Like nothing I’ve ever experienced. I am pretty good with pain but that was another level and that was with pain killers! I felt drained, weak and vulnerable. As the nurse wheeled me back from my attempted rinse shower there I was met by Chris and my Dad in the room and once again emotion overwhelmed me.

Chris reassured me he had been to see the boys last night and they were ok. I couldn’t remember a thing but he seemed happy so that was good.

Finally the Docs did their rounds and I was finally given the ok to be wheeled up to the NICU unit. It turns out the NICU is up a level and half way along the hospital from the maternity unit so in other works it’s bloody miles away!!! I couldn’t believe that I was so far away from my babies. Everyone else had them next to them and mine were half a building away?!

As we entered to NICU it was like entering a science lab. There were mounds of rules, excessive hand washing but as soon as you entered and saw the tiny bodies in there it became so apparent why it was necessary. As I was pushed towards where two boys were, an overwhelming anxiety filled me.

It’s hard to put into words that moment when you see your babies for the first time in the NICU. There they are, tiny, vulnerable little beings in a giant box (humidicrib) with tubes coming out of them, monitors beeping and you are just trying to work out if they are ok. Tears streamed down my face as I peered into the humidi-cribs, so tiny, so precious but as I watched closely I could see their little chests rising and falling. A wave of relief fell over me.

My head kept turning back and forth from one crib to the other. I wanted to desperately look at them both together but I kept having to chose and I didn’t want to take my eyes off either of them.

Suddenly the nurse popped up behind me, introduced herself and hurtled off a lot of information as to how the boys were. They were breathing well on their own, their oxygen sats were good, hearts were ok, they were struggling temperature wise and they were being tube fed. It all sounded incredibly risky and dangerous but she seemed to be relaxed and happy.

It was incredible looking at these tiny little beings to think that only yesterday they were inside me and now here they were, surrounded by tubes and machines, trying to give life a crack!

The nurses asked me if I wanted to touch them. I looked at her surprisingly! I mean of course I did but was it ok? I suddenly felt worried and concerned. It’s something I never imagined, feeling unsure about touching my baby, but in that moment I felt I wasn’t qualified. What if I hurt them? or it wasn’t right? I never imagined having to need approval to simply touch my babies!

A load of instructions and heaps of alcohol wash later and we were allowed to pop our hands through the holes and touch these tiny precious humans. That first touch is incredible. It’s life changing. It’s that breathless moment you realise you got them here. All 40 fingers and toes, 2 brains, chests, lungs and 8 limbs and there here…perfect micro mini humans! How the hell did I do that?

I have never seen such little hands and such perfect sleeping faces. They really were perfection! 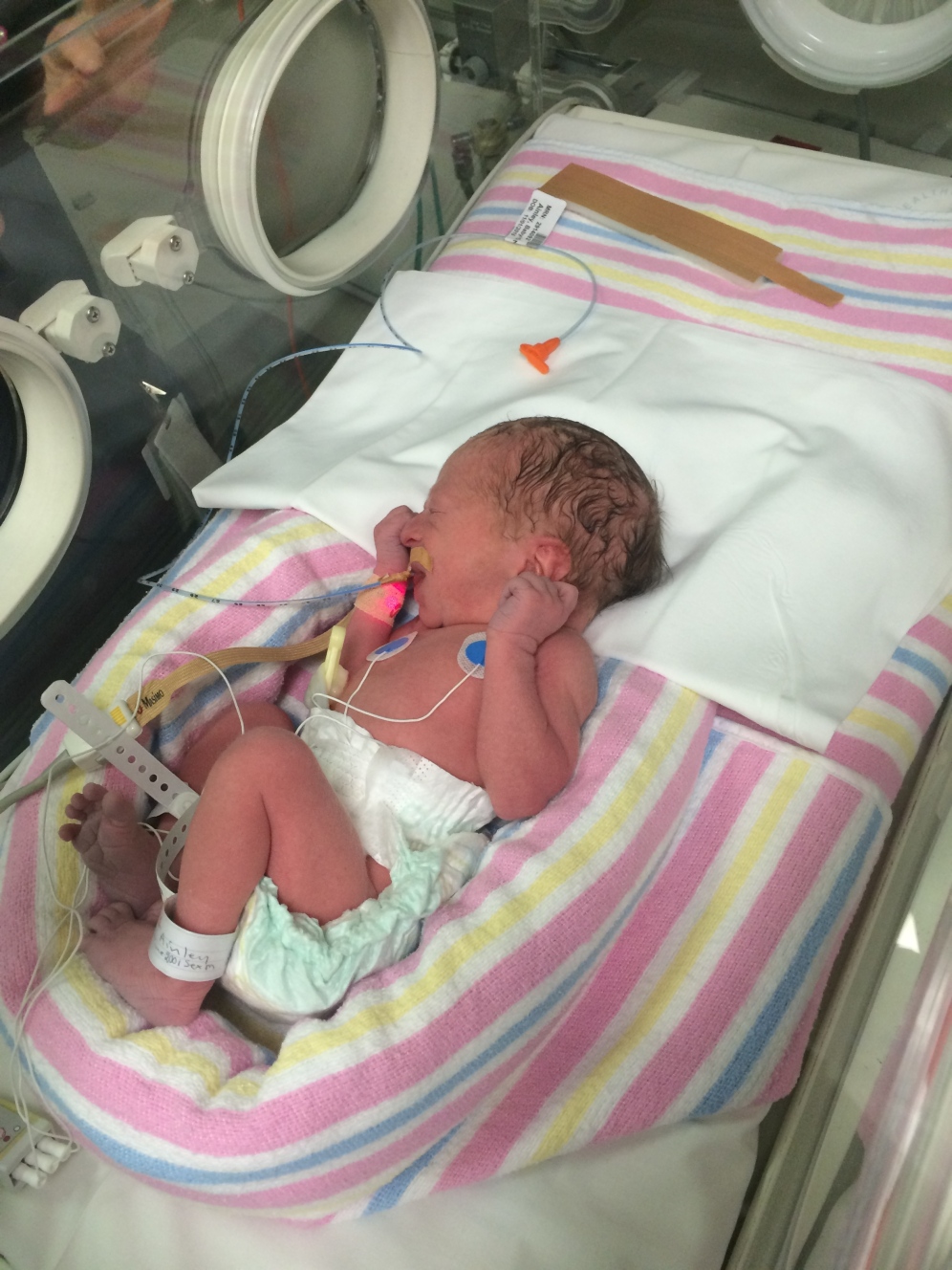 Choosing who to touch first was an impossible moment. Chris went to Hunter and I was with Harry until guilt got to me and I wanted to be with Hunter. Little did I know that this was going to be the biggest unexpected challenge of having twins, spending moments like this having to choose between the 2 things you love equally. Now, I just had to keep focussed that one day soon I’d have them both in my arms.

People ask me regularly how did you feel in that moment. I felt numb. It felt a bit like a dream I would wake up from. Touching your babies through a tiny hole in the side of a box doesn’t give you a sense of ownership, were they really mine? However, looking down at their tiny sleeping faces my heart told me straight away they were mine and I experienced exactly the same emotions towards each of them at the same time. It’s an odd thing to love 2 beings exactly the same way instantly but it’s certainly possible!

I remember clearly staring down at my enormously large hand next to such a tiny face and all I could think was “hang in there little tigers, I’m not going to let anything happen to you now.”

Little did I know the challenges were really only just about the begin.