Today is Mother’s Day! Although to be honest we have no idea what that means because we are 2…and we can’t understand, but this morning Daddy told us to give Mummy a kiss when we got into their bed because it’s Mother’s Day. Harry just wanted to watch Paw Patrol and sit on Mummy’s tummy when she needed to pee and Hunter cried because he didn’t want to be in bed, he wanted a drink of milk.

We decided to watch PP for a bit while Daddy slept, mummy kept trying to move Harry so she could get up and pee and when she finally escaped, we went with her and watched her pee.

Finally she said we could go to the lounge and have milk. We wanted to watch Mickey Mouse she wouldn’t let us instead she watched the boring news so we had a fight over who had which car. Harry wanted the fire truck Hunter had, Hunter wanted to keep it so Harry had a meltdown. Mum offered Harry 7 cars…he didn’t want them he wanted Hunters fire truck. Hunter dropped his fire truck, Harry grabbed it…Hunter had a melt down. Then we did it again.

Mummy tried to calm us by making cups of tea…we love tea. Hunter drank his and took Harry’s, Harry had a melt down. 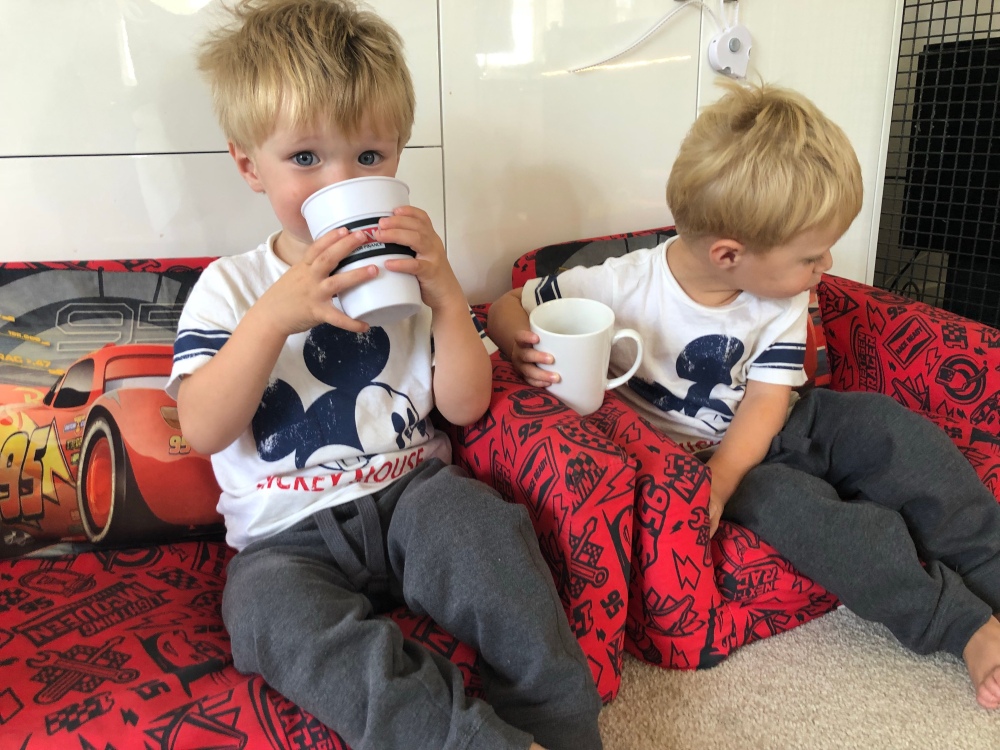 Daddy came out and gave mummy some presents, she gave us kisses and cuddles…strange. Daddy went to work.

We both screamed because daddy left. We didn’t want him to go. Mummy tried to give us some breakfast biscuits to calm us but Harry refused and Hunter got upset because his broke!

Mummy decided it would be more fun to go out as we weren’t really happy at home so she promised milkshake and egg if we got changed! Harry was a good boy and put his clothes on Hunter wanted to play a game called ‘I’m not getting dressed today thanks Mum’, he loves this game cos he runs away from Mummy every time she tries to change him, mummy doesn’t find it as funny.

After we got dressed mummy needed to change so we thought it would be fun to jump on her bed and take all her jewellery off her bedside table…mummy didn’t like this and ended up rushing to get dressed and didn’t realise her top and jumper looked silly, her hair wasn’t brushed and her beanie was on inside out…we didn’t tell her… because we are 2!

Mummy put our favourite cars in our backpacks so we could take them but we were too excited to wait so we took them all out again when she wasn’t looking. Then we did it again while she was getting nappies but after we put our shoes on we let her put the toys in the bags so we could go.

We got to take our tandem bike. We had a really big fight over who went in the front. Hunter was there first so mummy let him go in the front and drive, Harry cried half way to town and mummy said if he didn’t stop he wouldn’t get egg. He stopped.

When we got to the cafe it was really busy, mummy couldn’t get our bike in the door and kept running into walls and then she laughed funnily because she saw people we know. Mummy ordered us eggs and milkshakes and her coffee (yuck) but she’s not having breakfast because she said it’s too hard and there will be left over toast bits.

We had so much fun running around the courtyard of the cafe. We jumped on all the seats and ran up and down the bench seat mummy said it was ok because no one was there. Then our milkshake arrived and Hunter drank his quickly then he disappeared behind a sign…he needed to poo! 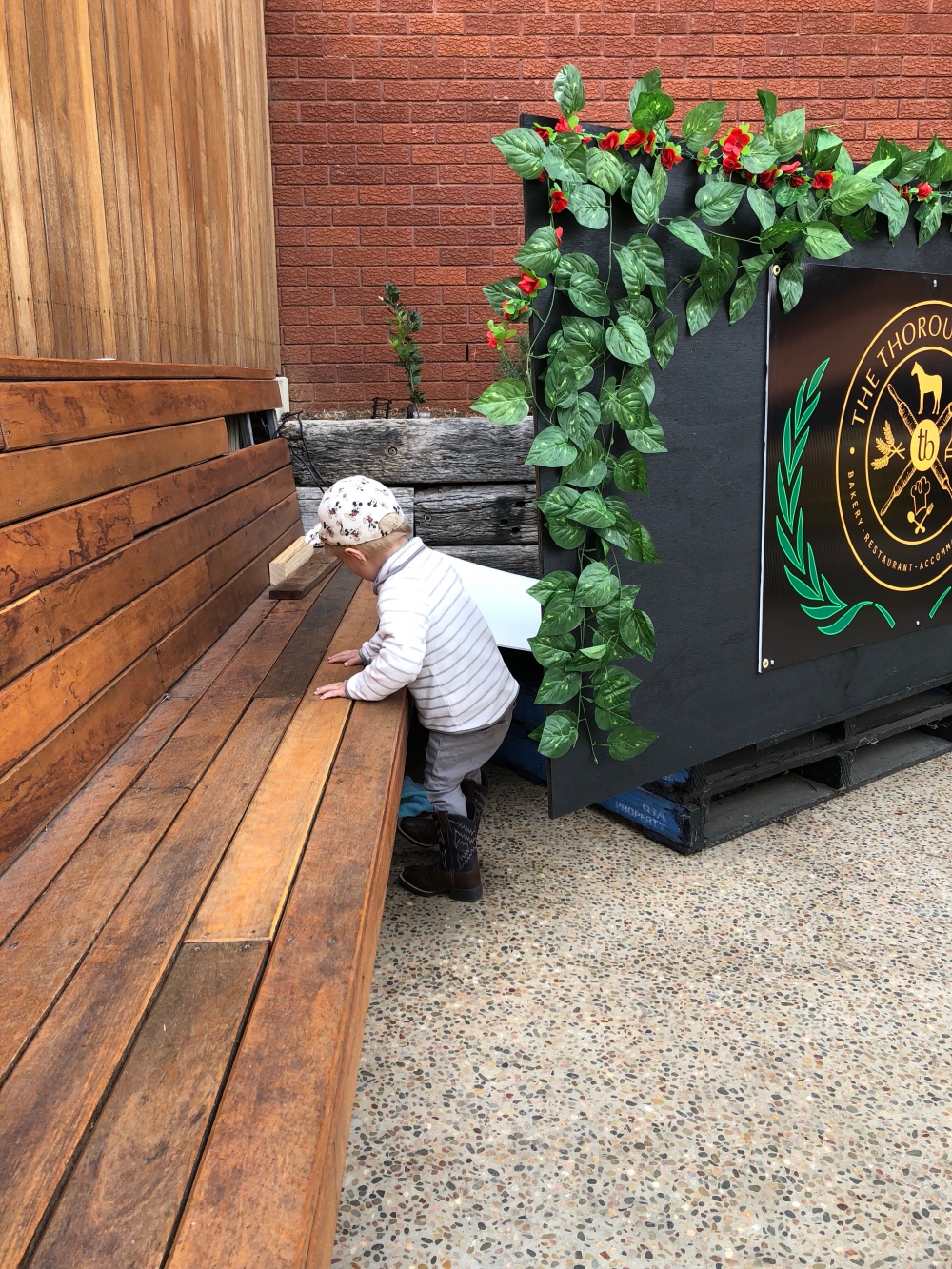 When our eggs came mummy kept asking Hunter to come out but he was still hiding…he takes his time. Harry ate his eggs and toast while mummy tried to get Hunter, eventually he came out but had a yucky bottom. He wanted some egg but mummy only let him take a mouthful as she wanted to change him. 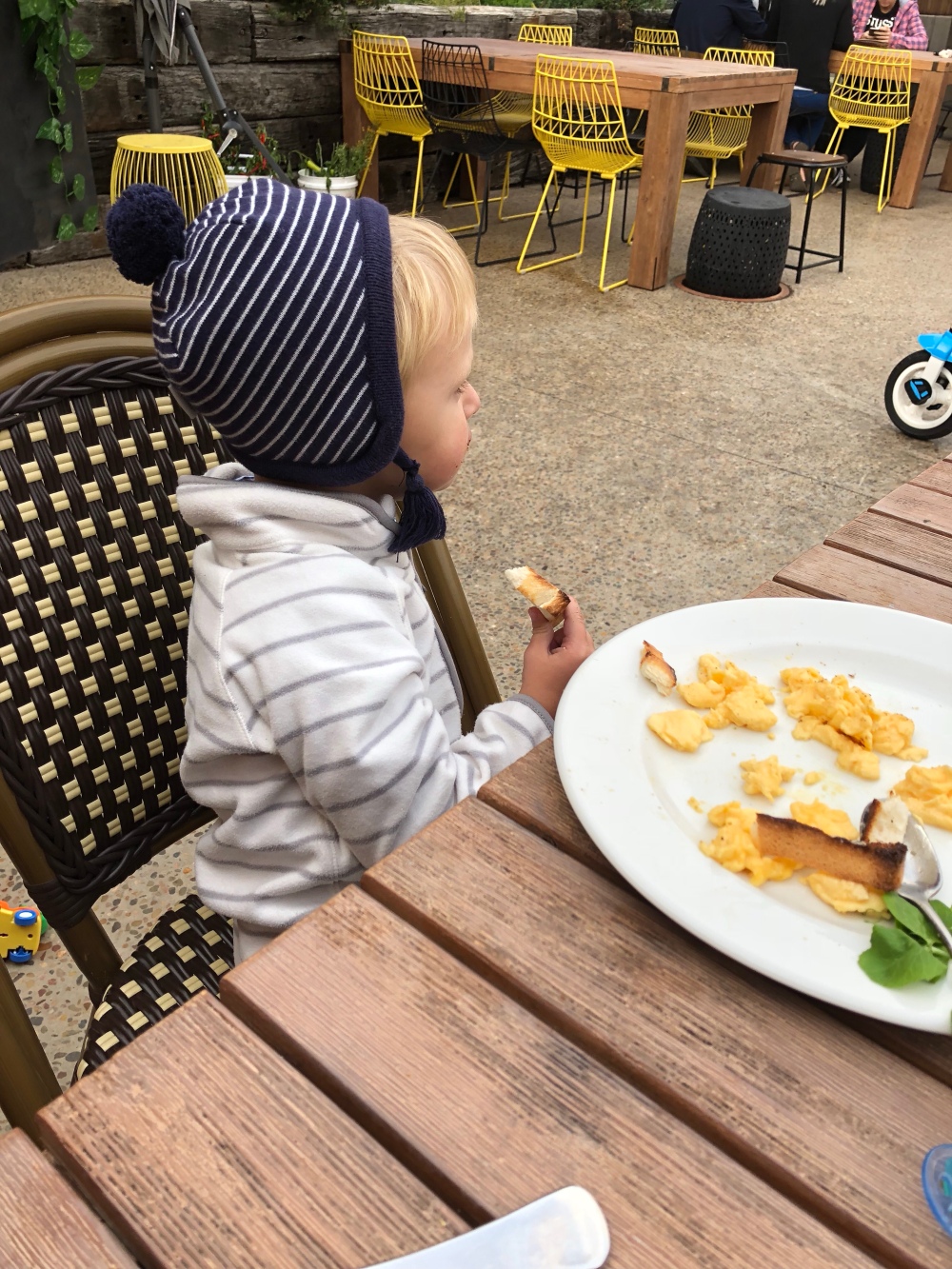 We all had to go to the toilet to change Hunter and mummy had to ask people not to clear our breakfast. Mummy got a little bit cranky at us in the loo because Harry kept slamming the door and Hunter didn’t want to change his bottom then hunter sneezed and he sneezed egg all over Mummy we thought it was hilarious…mummy didn’t.

Finally we went back and finished our egg. Then mummy said it was time to leave so we fought over who went back in the front seat. Mummy said it was Harry’s turn so Hunter cried until a Choo Choo train came past!After we got home mummy said we could go for a walk so we went up the street and saw cars and flowers. We played chase with each other and then when we got home mummy let us roll around on the grass it was fun! 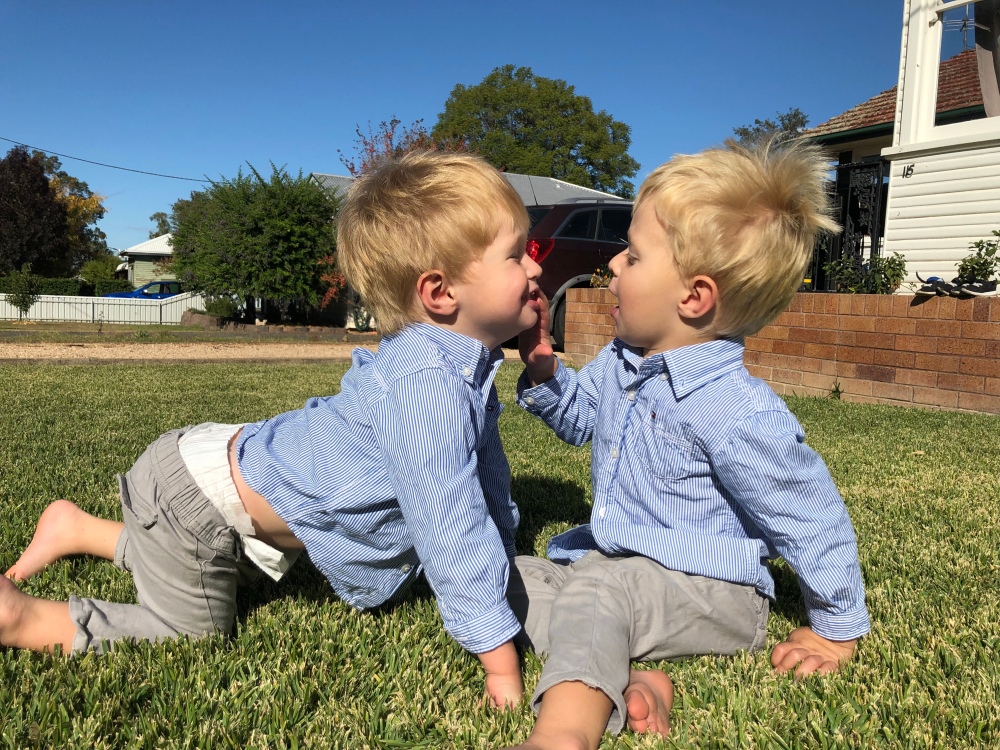 Then mummy said we could watch one cartoon before we had a nap. Now we’re asleep. When we get up mummy will tell us that she did 2 loads of washing, put the clothes away, cleaned the kitchen, put away our toys and then finally sat down for half and hour to have a cup of tea before we wake up. Mummy says she’s lucky. Xx 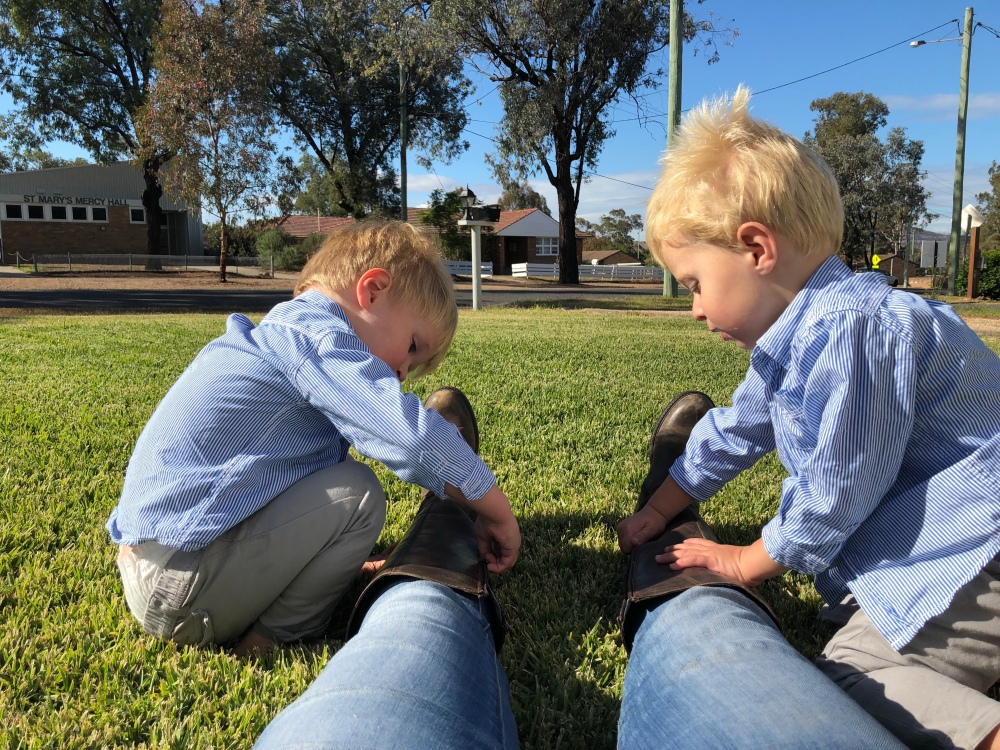